"Eavesdrop much? Pretty sure that's rude no matter what region you're from." — Gladion

Gladion is a trainer living in the Alola region.

Gladion is a teenage boy who takes after his parents' appearance. His blonde hair is partially buzzed some lines carved into his hairstyle and his forelocks hang over his right eye. His ear is pierced and he favors black ripped clothing. He wears a red fanny pack around his waist.

Unlike most people who are Buddyized, Gladion's clothes don't match his color scheme. Instead, they more closely match his mother's aesthetic, with a yellow and white striped polo shirt and a yellow set of shorts. He has hints of red in his belt and loafers His hair is carefully slicked back with a cowlick, leaving both eyes exposed. Also wears a watch on his left hand.

Gladion is a rough person, often getting angry and doubting other people's motivations. It takes a lot before he shows happiness. However, he is still quite protective of himself and others, including his little sister, Lillie.

When Buddyized, he becomes unnaturally happy, even mores due to his usual dower expression. He becomes a little obsessed with reuniting his family, focusing on bringing Lillie back to the Aether Foundation.

Gladion is one of the few Aether Foundation members who is suspicious of Team Buddy. He is first introduced arguing with Lillie about their mother's judgment about the team, even begging for Lillie to trust him. The argument ends on poor terms after Gladion notices Sirius/Stella eavesdropping on them and storms off. He later tries to bring up his concerns with Lusamine but grows increasingly upset as she dismisses his worries. He even brings up that she seems to trust Team Buddy more than her own children with the foundation. Ultimately he storms off, unconvinced that Lusamine will actually resolve the issues with Team Buddy.

Later in Royale Avenue, he saves Sirius/Stella and Lillie from Team Buddy grunts trying to buddyize them. He thanks Sirius/Stella for protecting Lillie and joins them for a few double battles. Before the two can complete drive the grunts away, things get eerily quiet as Cynthia waltzes in. Gladion is shocked that Team Buddy got to her, but she brushes off the idea that they had to "get her" in the first place. Gladion demands for Team Buddy to fix whatever they did to his mother, implying her Buddyization. Cynthia confirms that she and the Boss Buddyized Lusamine after her and Gladion's argument and that they're going to do the same to the siblings. Seeing that there's no way to defeat the Sinnoh Champion and all of the grunts, Gladion tries thinking of a plan for all of them to escape, even considering calling out his entire team to distract the group so at least some of them can escape.

Before he can put any plan into action, Mr. Buddy strolls in, demanding for Cynthia to let Cherry go and to stop taking over Alola. Cynthia isn't fazed by his threats and emits more Lucid Mist in response. Before Buddy can agitate her more, Gladion stops him and reveals that the woman he's speaking to is the Sinnoh Champion and explains that he has no idea what he's facing. As Buddy and Gladion argue about whether or not dealing with her would be a good idea, they see a Buddyized Garchomp beside Cynthia. Buddy takes out his Alolan Muk and Wigglytuff to counter the menacing Pokemon, much to Gladion's annoyance. He turns to Sirius/Stella and Lillie and tells them to run as soon as they get the chance. Despite Lillie's hesitation, Gladion insists Sirius/Stella to get Lillie to safety while he and Buddy hold off Cynthia in a double battle. As Gladion and Buddy fight Cynthia, Sirius/Stella and Lillie escape. Moments after Sirius/Stella and Lillie are safe from the Team Buddy grunts, Buddy falls from the sky. He reveals that Gladion didn't escape Cynthia, much to Lillie's horror.

After Sirius/Stella defeats Kahili and regroups with Buddy and Lillie, Gladion rejoins the group. Lillie is relieved that he's okay and Buddy asks how he got away from Cynthia. Gladion explains that he escaped from Cynthia and at first it seems like he escaped unscathed. However, things take a nosedive when Gladion calls Lillie 'Lillith' and peppers his language with 'swell' and 'golly'. This is enough to cause the other three to panic and get away from Gladion. He flashes the three an unnatural smile and tries to convince Lillie to come with him so they can be with their mother (requiring Lillie to become Buddyized as well). Gladion tries approaching Lillie to bring her with him, but Buddy immediately protects her and Sirius/Stella step up to battle him. Once defeated, Gladion is impressed with Sirius/Stella, and tells Lillie she is welcome to come home with him and Lusamine at any time. He leaves before Buddy is able to give Gladion the antidote.

After Wicke's announcement about Team Buddy's gala, Gladion and Lusamine call out to Lillie to convince her to return. 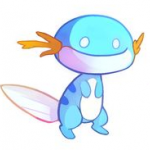